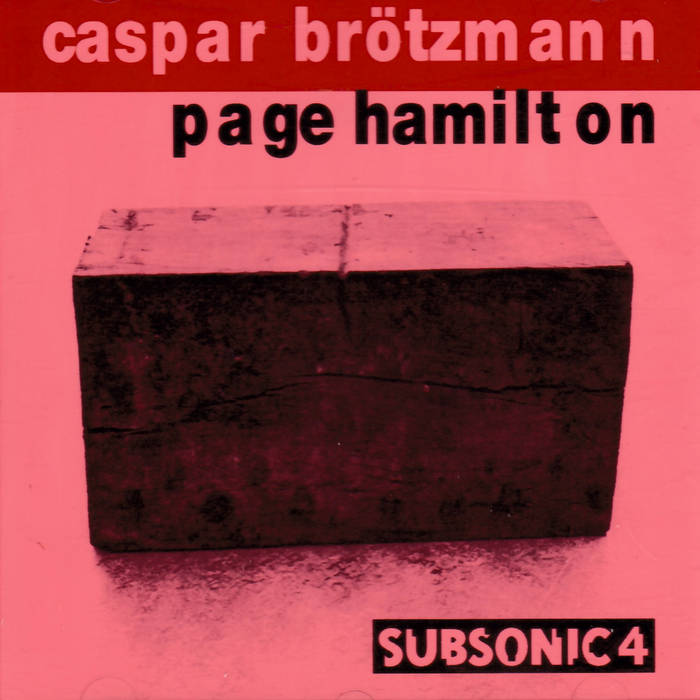 Fourth record of 6 in the Subsonic series dedicated to the electric guitar. Published in 1996. Originally packaged in red-tinted jewel casing with clear CD tray.

"You can hear it now, but can't quite imagine it completely: the organic, painterly throb of Caspar Brötzmann's smoldering pyrotechnics, colliding head on with the heavy, jazz-tinged virtuosity of Page Hamilton...this combination creates such an exciting, expansive sonic picture...if guitar as visceral mind-spirit exploration is your thing, then the once in a lifetime duet improvisation of Zulutime is a serious one-way ticket...out.

Page Hamilton is a guitarist, singer and record producer, mostly noted for his work with alternative metal band Helmet. Most of his work has been in the heavy metal or hard rock styles, but Hamilton, who was trained in jazz guitar, has also worked in other genres.

Caspar Brötzmann is a guitarist and composer. While Brötzmann typically performs with the power trio lineup of Massaker, with guitar, bass guitar and drum set, he only uses rock and roll and heavy metal music as a basis for his music. Brötzmann's technique has been praised: "...his attack on the instrument - explosive, obstreperous, large scale, textural, timbral - asserts the material facts of string-pickup-amplifier more bluntly than anyone else currently involved in rock".
PRESS

Just the thought of pairing Caspar Brötzmann and Page Hamilton has some intense implications. Independently, both had been sonically investigating the ambiguous and organic for years before recording Zulutime. Brötzmann, whose spirit of musical investigation was perhaps handed down genetically by his father (free jazz phenom Peter Brötzmann), had been actively working soundscapes since he was a teenager in Germany. Page Hamilton, however, is most notably recognized as an indie rocker in the early-'90s band Helmet. On any Helmet album, one will find sonic explorations of a sort, albeit constricted into a 4/4 time measure. Helmet was Hamilton's baby, but it could be argued that grungecore was selling his classical training a little short. More closely related projects could be found with his collaborations in Glenn Branca's wall-of-sound symphonies.   Zulutime is a great meeting between two guitarists of a like mind. The sound is deep, resonant, and confrontational -- but also contemplative. The two waste no time in hitting the listener hard with aggressive feed and fuzzy distorted chords. At the halfway mark, the ironically titled "Hit Single" takes the listener to warmer places, letting some open space take over for aggression by means of slight feedback and the tapping of muted strings. It is a much welcomed change, as the first half can be a little overbearing. There's no time signature here, so the musicians flow quite independent of each other, but the trance-inducing result is as cohesive as this kind of stuff gets.
Jack LV Isles / All Music Guide