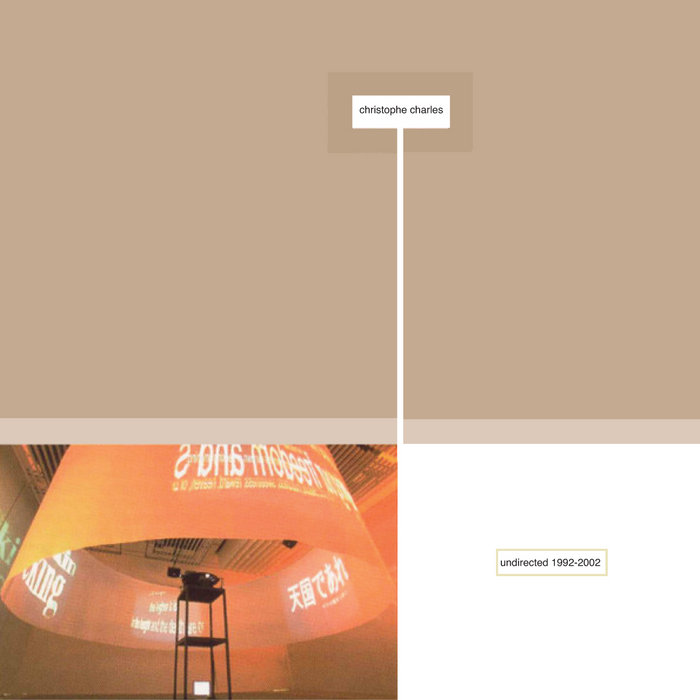 WORKS & COLLABORATIONS
undirected 1992-2002 is an "exploration" through music, texts and photographs, an echo from Earth and its inhabitants. Composed in Tokyo where Christophe Charles used to live (he is now Associate Professor at Musashino Art University, Tokyo). This release is a follow-up to 'undirected 1986-1996' (1997 Mille Plateaux). Charles also remixed Microstoria in reprovisers (1997 Mille Plateaux) and Yoshihiro Hanno in April Remix (2001, Sub Rosa). He also appeared on Oval's 'dok' album (1997 Thrill Jockey). and worked on several occasions with Ikeda Ryoji on installations in Japan.

UNDIRECTED 1992-2002 - features two compositions.
1
"next point - tribute to Henning Christiansen", is a performance given at the MANCA festival in 1992, it is an extension of "Media Opera" organized by Yamaguchi Katsuhiro in October 1992 on Awaji Island to celebrate the foundation of his "Village of the Arts". One can hear the rain falling in the south from Majorca, the voices of salesmen of coffee and boiled eggs of the station of Howrah, beside Calcutta, the chants of the monks of Todaiji in Nara, and the calls of the merchants of ice cream of Hangzhou (recorded by Martina Diestel). Other sounds were sampled among the works of Henning Christiansen: sporadic chords of the piano of the cave of Penthesilea, the very particular sound of the long pipe which Christiansen hits more or less regularly on one end, "in order to give a certain feeling of time", or the bells and the tuba of the "garden of the yellow mountain" where low frequencies make almost inevitably vibrate the ceilings of the rooms where it is played.

2
'deposition' contains ten episodes of various lengths which are connected according to dynamics of tension and release. There is no particular narrative dimension, but "scenes", featuring soundscapes from various cities and countrysides, as well as musical (instruments) sounds: voice, flutes, or percussions, which reflect an interest for the fundamental actions of breathing, or hitting objects with the body - rather than praising the mastery of a particular technique. The sounds generally come from an action which does not have any musical claim, for example, the Senegalese women who crush the millet. The voices are those of the salesmen from the Fischmarkt of Hamburg, the children of Calcutta, Italian dogs howling in the night, or insects in Japanese mountains. Other sounds come from a collaboration with Ryoji Ikeda, from "In Memoriam Gilles Deleuze" and from the music of the two permanent sound installations in Osaka and Tokyo-Narita International Airport.
PRESS

If the fabled "global village" mutates into an actual city, Christophe Charles has the soundtrack. He collages field recordings into a scene in which Hamburg businessmen chat with Calcutta schoolchildren in a Bangkok traffic jam, while Japanese crickets and Italian dogs bicker into the night. In Undirected's liner notes, Charles insists that everything here is unmusical, as he lets a computer randomly play his sound files. Yet the result is awfully symphonic, as drones and field noises saunter at a meditative pace. This is raw psychedelia for the Information Age.
Cameron Macdonald / XLR8R