Standing Upright on a Curve 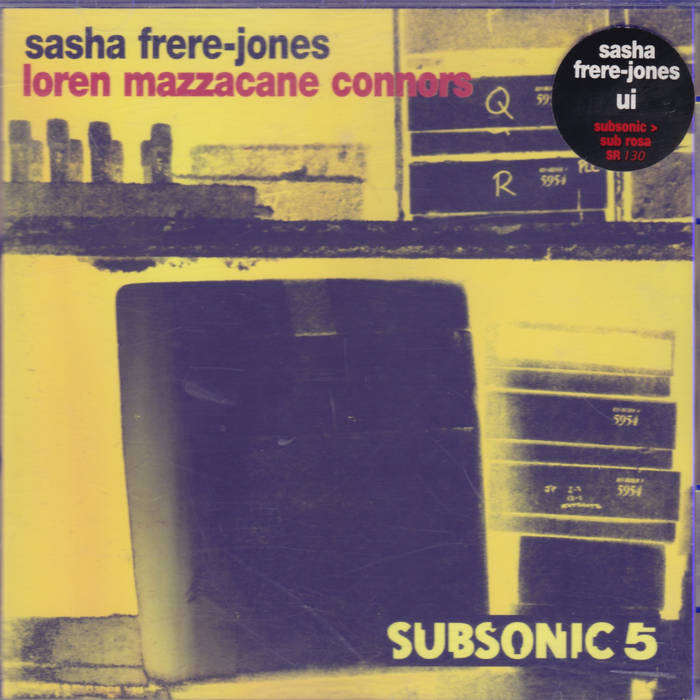 Fifth record of 6 from the Subsonic series
dedicated to the electric guitar.
Published in 1998.

In Sub Rosa's ongoing series of guitar duet record's (with shamefull long intervals), here's one that is devoted to improvised music. Frere Jones, one third of Ui, performs three tracks of layered guitar improvisations. 'Stutter' opens in a nice minimalist tone, but towards the end the tension drifts away. But in general quite o.k. improv stuff, that places care upon the changes and colours possible. Mazzacane Connors gets more and more known, and his guitar playing is of a different nature. It seems like one guitar being fed through effect boxes (distortion), and his short sketchy pieces are like small soundtracks. Images of dark clouds, heavy sunbursts and endless desserts could go very well together with his desolate playing. Hauntingly beautiful. (
FdW)

SASHA FRERE-JONES
is a musician and writer living in NYC with his wife, deborah, their son, sam, and deacon, the dog. he also runs the bingo record label. he has played in and organized the band ui since 1991 (lifelike, april, 1998 & sidelong, march, 1996 both on southern). after his recent collaboration with stereolab (uilab), he is currently working on a remix for tom ze, collaborating with various musicians including matt sweeney of chavez and alan Licht, making remixes of luke vibert, microstoria, bill laswell, recording songs for two separate albums to be released in 1999 on bingo, programming an ui compilation of singles and rare tracks and beginning a collaboration between charles hayward of this heat and ui. his music has appeared in commercials and films. his 3 tracks are rhythmic percussive guitar, fascinating, precise, delicate, remaining Ry Cooder meeting Jim O'Rourke. 'one of my best work' said Sasha.

LOREN MAZZACANE CONNORS
is born in new haven, connecticut. after a nascent visual arts career in the mid-70s, he began sketching a sonic equivalent to the abstract expressionism as rothko. 20 years later, connors made the cover of Billboard ! jim o'rourke's patronage and thurston moore's help plus a recent successful european tour and the world has finally woken up to his music's quiet power. most recent release: a possible dawn on hatnoir. his 7 brief solos pieces are inspired by a dream with emotional charge and bluesy soundscape, tending to conjure up echoes of Blind Willie Johnson's expressive guitar playing. technique is here a process of discovery, a highly personal communicative need.