A Heart and Two Stars 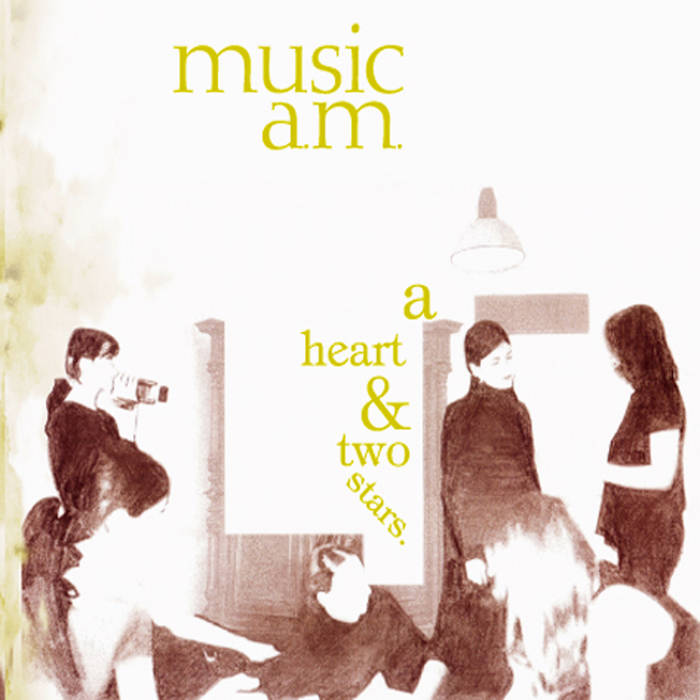 Strictly speaking, MUSIC A.M. didn't form in the morning, but rather one
evening in January 2002. On the evening in question, Volker Bertelmann
from Düsseldorf and Luke Sutherland, from London, met to discuss their new musical project.
Luke Sutherland, former singer and guitarist with Long Fin Killie, as well as
fiddle player with the immensely popular Scottish instrumental rock band
Mogwai, was deeply immersed in the final draft of his second novel
"Sweetmeat" (his first novel "Jelly Roll" having been nominated for the
Whitbread Prize in 1998), while Volker Bertelmann, had just finished his
first album with the electronic pop outfit Tontraeger (together with
Torsten Mauss).
Not forgetting to switch off the electric and feed the cat, Sutherland
abandoned his typewriter a few months later and headed for Düsseldorf
to record the first batch of songs. Music was definitely in the air. However, after a few instrumentals and vocal numbers, a feeling familiar to musicians began to dawn upon to both of them: We need bass! As luck would have it, Stefan Schneider, better known as Mapstation and bassist for To Roccoco Rot, wandered by and was so taken with the work in progress, that he rushed home without further ado to fetch his bass to satisfy Luke and Volker's desire for those warming, deeper frequencies. With time and more collaboration in the studio, Schneider became a friendly accompanist and fellow musician
without in any way swelling the ranks of MUSIC A.M. beyond capacity.
A textbook case of how a band might get together: what's conceived and desired from within, ensues without. Three individuals, three attitudes, three paths, influences, backgrounds and visions complimenting one another, composing then recording what transpires, meticulously organizing, talking, falling silent, selecting, ultimately realising the highest common denominator: MUSIC A.M.
And now their first album is here - A Heart & Two Stars - the title at
once alluding, if you will, to the creative triumvirate, whose collective name in turn extols the early morning, itself a radiant metaphor for inception, something new, hope. Musically speaking, MUSIC A.M. has carefully, almost bashfully woven diverse stylistic threads together: contemplative, ambient electronica, textures from country, folk and pop music, the structural ease of what is known as post-rock, and finally a synaestheticism, which I call "data pop". A Heart & Two Stars is cheered by its inherent wistfulness, anaesthetized by atmospheric calm and reserve, muddled by one's own nightly dreams which, when transported into daylight, become fantastic, comical everyday stories. Luke Sutherland sings as one who would be silent, whilst the instruments are played as though they were listening.
MUSIC A.M. does not purvey a torpid, pseudo-romantic, introspective
indie-electronica, having discovered instead its own narrative mode, which, given the choice between the reference points Yesterday and Today, chooses Tomorrow as the beloved Present. Music, which my ears long to hear when,,in the first light of day, my eyes behold something which makes me smile. You,,for example.
(Tobias Thomas)