Three overpopulated cities built by short​-​sighted planners, an unbalanced and quite dangerous airport and an abandoned church 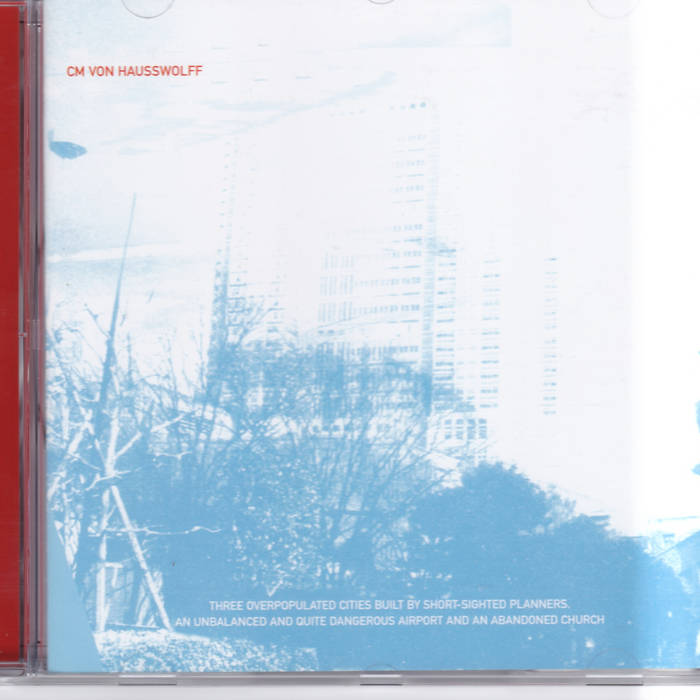 By visiting Lagos in 1983, Tokyo in 1999, 2000 and 2001, Bangkok several times between 1986 and 2002 and Mexico City in 2002 and 2003, CM von Hausswolff came, as thousands of other people, to the conclusion that something is running amok. An uncontrollable avalanche consisting of the construction of houses, streets and in-between spaces develops in large cities as independent "anything can happen"- status. They're places we hate, because they remind us of what lousy creatures we actually are. How long will they last? Maybe as long as the feedback sustains... A conclusive statement rolled over the above-mentioned composer when he stumbled over an abandoned church in Chicago. This sad place, once illuminated by Marin Luther King, is now in the hands of soaptalkshowcommander Oprah Winfrey's chef Art Smith .... Maybe it's a sign of something good. At least we know the quality of his desserts...

This new release, following his "A Lecture On Disturbances In Architecture" (Firework Edition Records, Stockholm, 2002), deals with these matters in a formal way.

His recent records include Strom (RasterNoton, Berlin) and Operations Of Spirit Communications (Die Stadt, Bremen) and his rather rare live performances have been noticed in past year in Valencia, Berlin and Helsinki. During this time he has also been collaborating with American artist and composer John Duncan (Stun Shelter), the Finnish duo Pan sonic (sorting out the sounds of Erkki Kurenniemi) and Nizar Ali Siala , the court painter for Mohammar Khadaffi. His electronic music combo Ocsid, featuring the skills of Graham Lewis (Wire) and Jean-Louis Huhta, is also an essential element in von Hausswolff's aural work. He's also known for his visual art work including projects within the frameworks of the Documenta X (Kassel, 1997) and the 49th and 50th Venice Biennials as well as the biennials in Istanbul, Johannesburg, Santa Fe, Pusan, Gothenburg. His work has also been shown at Museum Ludwig (Cologne), MoMA Oxford, Moderna Museet (Stockholm) and at galleries in Zagreb, New York, Los Angeles, Tokyo, all over the w

If you like Three overpopulated cities built by short-sighted planners, an unbalanced and quite dangerous airport and an abandoned church, you may also like: