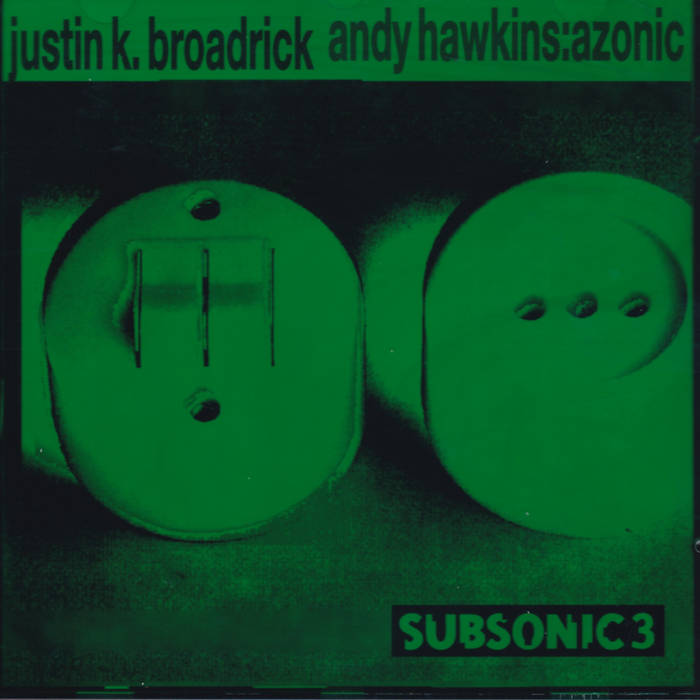 Third record in 6 in the Subsonic series dedicated to the electric guitar. Published in 1995. Originally packaged in a dark green-tinted jewel case.

JUSTIN BROADRICK
Mainly known as the head of GODFLESH, the most important band on Earache Records. Sub Rosa has asked Justin to imagine pieces for electric guitar - the result : 'guitar manipulations'- four tracks (more than 40' of music) exploring sonorities, noise and rhythms. Recorded at Avalanche Studio, England, may 1995.

ANDY HAWKINS
In the same time the explorer-guitarist of AZONIC (audio releases on Subharmonic, New York) and the leader of the mythic BLIND IDIOT GOD (people who have had the chance to see them know what I mean). Their records are rare and violent gems (the last one produced by John Zorn on Avant). The two original tracks presented here, River Blindness and Nine Tails (25'), are produced and designed by Bill Laswell and Andy Hawkins, recorded and mixed at Greenpoint studios, Brooklyn, New York, march 1995.

PRESS
A shared CD of solo electric guitar with plenty of enhancements, Subsonic 3: Skinner's Black Laboratories offers some compelling and chilling work from two of the more experimental musicians exploring the cold, outer reaches of rock in the '90s. In his time with the bands God and Godflesh, Justin K. Broadrick sculpted an approach referred to by critics as isolationism, where harsh industrial sounds dominated, often oozing into freeform noise fests, almost always with a dark and brooding tinge. Three of his four tracks here occupy similar territory, though they're all very carefully considered and plotted. Broadrick stays toward the lower, rumbling regions of his guitar (utilizing a substantial amount of effects and looping), giving one the feeling of leaning against an unusually musical turbine generator. They are bleak but thoughtful, melancholic but with a romantic edge. "Guitar Two," on the other hand, is a relatively carefree jaunt with folksy strumming that almost evokes John Fahey. Unlike Broadrick, Andy Hawkins -- the driving force behind the superb avant power trio Blind Idiot God -- aims steadily for the stratosphere. "River Blindness" opens with searing guitar screams over sampled tablas, the roar of his sound being pulled and twisted like an arm wrenched out of its socket, gradually dissolving into a deep, sonorous hum. The second of his two contributions is more of an extravaganza, as Hawkins fashions a fuzz-strewn maelstrom that would send most metal guitarists loping home, tail between legs. For the adventurous rock fan who doesn't require words or a steady beat, this album could perform a much-needed reaming job on his/her ears.
Brian Olewnick, All Music Guide