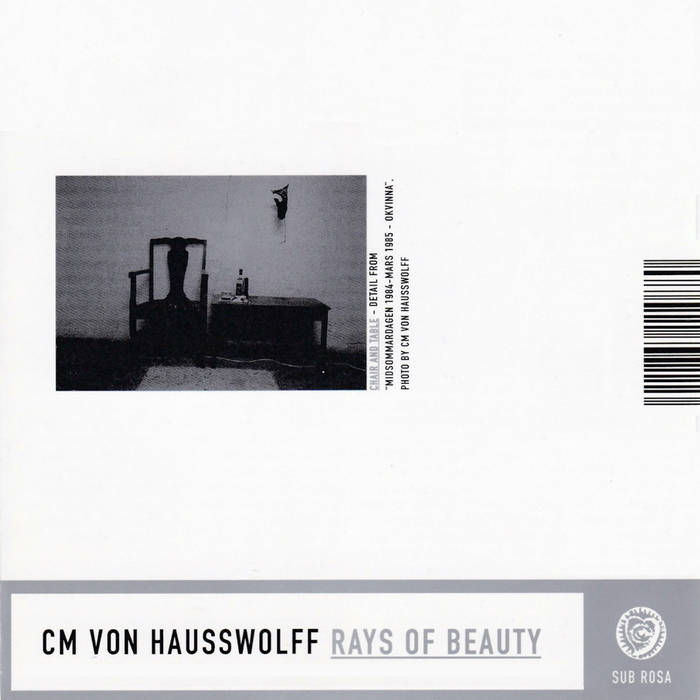 RAYS OF BEAUTY
This record includes four rare compositions by CM von Hausswolff, published in the early '80s on limited- edition vinyls (originally released on vinyl by Radium between 1983 and 1986). They are in fact some of the first traces of ambient or dark ambient on records. Noted by Andrew McKenzie of The Hafler Trio as an early source of inspiration. McKenzie wrote a long moving piece of fiction text entitled "But Man is Stuffed with Gods" especially for this release (included in the booklet). These recordings are now, for the first time, fully avalaible on CD and online.

THE HAFLER TRIO & ELGALAND-VARGALAND
In the '90s, CM von Hausswolff established a strong collaboration with The Hafler Trio; they toured together in Europe in 1994. In 1993, he founded the conceptual state ELGALAND-VARGALAND together with Elggren where they have annexed all the border lines over the world as well as a digital territory

CARL MICHAEL VON HAUSSWOLFF
Born 1956, in Linköping, Sweden, he has, with his sound work, developed a new way of composing: by using conceptual materials within the framework of installations. In the early '80s he founded PHAUSS with filmmaker Erik Pauser. They made numerous installations, CDs, and performances in Northern Europe and in the USA. He has also collaborated with Graham Lewis (Wire, Dome) and Leif Elggren (The Sons of God).

Track 1 originally released on vinyl by Radium 226.05/Phauss (RAPH 002) in 1983. Stems from "Ledare ♀" performed at the Old Watertower, Linköping, Sweden, 23-29.10.1982. A live installation with the framework of ▼▼. Recorded and mixed at Studio Lane, Gothenburg, Sweden in March and August 1983. Thanks to Bengt Sandell, Institution for Physics and Measurement Technology, University of Linköping, for microphonic help.

Track 3 originally released on vinyl on the compilation Gothenburg 84 by Radium 226.05 (RAPH 005) in 1984. Stems from "Brytare/Brecher" executed at the VHS Kunstation, Kleinsassen, F.R. Germany 23.4-24.4.1984 and "Kopplare" executed at Firework Centrallagret, Stockholm, Sweden 16.6-22.6.1984. Location recording in Kleinsassen.
Recorded and mixed at Lane Studio, Gothenburg, Sweden in 1984.
Dedicated to Evalena Von Hausswolff.

Track 4 was recorded 13.7.1986 at Music-A-Matic Studio, Gothenburg, Sweden. By co-incidence the artist Brion Gysin died this very day and this piece is dedicated to his memory. Mektoub.