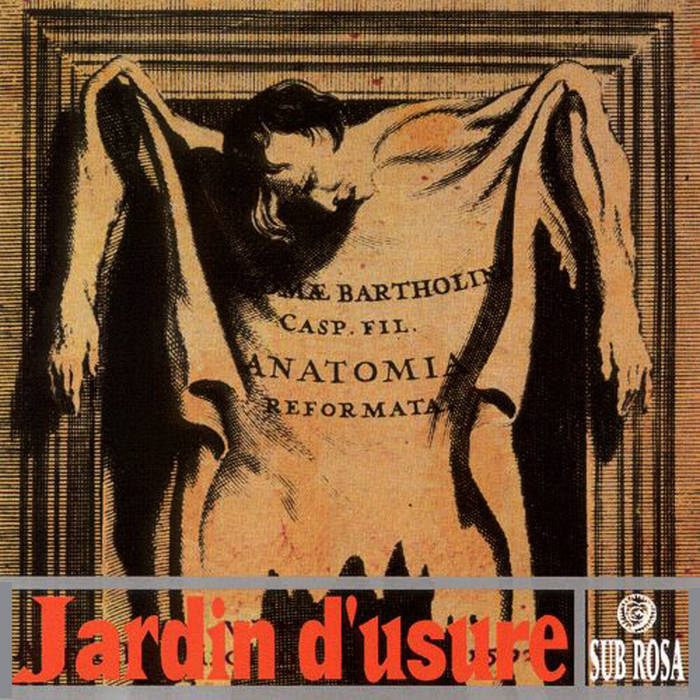 Musique du garrot et de la ferraille published by Sub Rosa in 1994 is a series of tracks and performances recorded at Le Laboratoire central, Brussels, from 1988 to 1993 by Gabriel Séverin and Marc Moedea.

« As far as I'm concerned, I think this is one of the 12 best records that Sub Rosa has released. it's actually a sound version of Henri Michaux with a touch of Poe. One day we received a parcel from Switzerland, we opened it and discovered this disc reduced to pieces by a hammer. I really liked this mail. How a music can get pissed at wanting to destroy the object. Sublime beauty of what made this anger emerge.» GM Hinant

LET THE PROBE PENETRATE YOUR HEART...
Jardin d'usure (Garden of attrition) might have been the secret of Dada, of Artaud, of The Hafler Trio (their first records are a black mirror in which these cries are reflected). They are a duo from Brussels whose intransigence renews the rules of the genre: concrete, industrial music, the art of saying the words. The "Dada chansons" are a milestone; the "Dernières recommandations" (Last recommandations) have decades of perspectives to offer...

LIST ON JARDIN D'USURE
What is Jardin d'Usure ? Maybe a sinister duo, a musical duo; they are duettists, a tree with two branches (practically impossible variable geometry), or a double barrelled shotgun (12-calibre). What do the words Jardin d'usure mean ? No. Nothing. But: the Garden, the famous school founded by Epicurus, implies: a theory of sensualist knowledge (which is concretised in our sonorous approach), an atomistic, mechanic and materialist cosmology (thus, our quest for the infinitely big/small, the indivisible? Everything is random and mechanistic in the universe; choice does not exist), and finally hedonistic ethics. Otherwise, in a garden, there is abundance, one can find everything and nothing, one can grow what one likes. Attrition (by friction) of rocks, of shoes, of physical forces that abandon us. Nervous attrition, war of attrition. There. Who are these two, their names ? Moedea (borrowing) & Séverin (borrowing). And what has been the itinerary of these two ? Certainly. Moedea is educated, has been to college, has graduated in "visual arts", monumental painting. At the time being singer of Hacked, a trash death band. He could do more, but for the moment he is not interested. Séverin is a normally educated boy, studied litterature, has also become a good citizen working for the Belgian Parliament (which is a noble task). His superiors & inferiors have never had any complaints about him. Furthermore, he is a Sunday writer.