Musik Oblik : Musics in the Margin #2 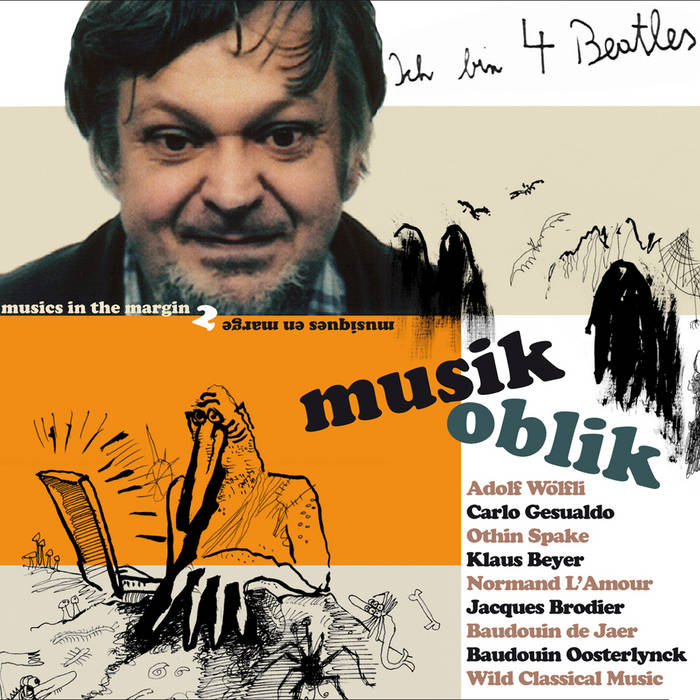 Based in Berlin, Klaus Beyer is mostly known for his unusual performances of Beatles songs, but this musician's talent is larger than that, as he also writes his own songs, makes short films and animated films, and works as an actor.

Normand Cournoyer launched his music career around the age of 70. He says he was inspired by the Lord, and therefore adopted the slightly religious alias Normand L'Amour. Self-taught, he has since written an incredible number of songs (more than 1,500, in over 75 languages) using a piece of random composition software.

Installation artist, performer, illustrator, sculptor, sound collector, and globe-trotter Baudouin Oosterlynck is thriving to expand our listening capabilities by creating prostheses and musical objects to multiply and increase our ears. Silence also plays a key part in his work, and he has traveled a lot to pinpoint geographical locations where one can enjoy complete silence.

The Wild Classical Music Ensemble, a music project started in 2007, on the day musician/audio artist/experimentalist Damien Magnette met Lynh, Johan, Rudy, and Kim, four artists with learning disabilities. From then on, their musical research has been based on free improvisation and experimentation. Lately, The Wild Classical Music Ensemble has been integrating punk/rock riffs composed by the group's guitarist Kim Verbeke.

A major representative of the Italian madrigal style of the Renaissance, alongside Luca Marenzio and Monteverdi. Gesualdo's position in music history has been largely reassessed in the 20th Century. Once seen as a marginal, unbalanced composer whose music was gradually falling into oblivion, Gesualdo is hailed by some as a visionary, the first composer, 300 years before Wagner and the Post-Romantics, to make significant use of chromatism and dissonance, and a precursor of the Moderns in his use of extreme contrasts and unusual rhythmical breaks.

A composer, violinist, and teacher, Baudouin de Jaer trained in Belgium and Canada with Henri Pousseur, Frederic Rzewski, and Philip Boesmans, among others. His concerts and compositions took him to Mexico, Peru, Korea, Palestine, and Morocco. Many of his works are multidisciplinary or adapted to a complete space.

A major artist of the 20th century, Adolf Wölfli was commited to the Waldau Mental Asylum, near Bern, in 1899. He remained there until he died. Wölfli started drawing, writing, and composing music at the age of 35, working all day long on what amounts to a colossal body of work. It comprises 25,000 pages of graphic compositions, collages, literary works, and music scores.

Jacques Brodier, artist and researcher, is the inventor of the Filtre de Réalité (Reality Filter), whose antennae, using the ionosphere's reflection, receive the electromagnetic noise broadcasted by Earth civilization and deep space. This airwave noise consists of radio signals from everywhere, music and voices in multiple languages drifting away, lost in a sea of cosmic noise, occasionally mistreated, butchered, distorted by untraceable causes or the mishaps of dissemination.