Music for Fragments from the Inside 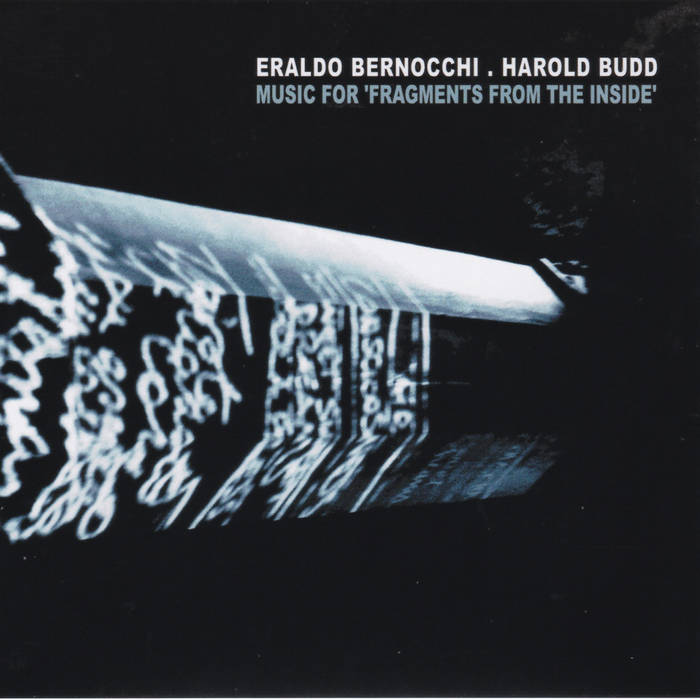 An astonishing piano player drifts on beats and scapes. Recorded during a magic night in the courtyard of a Siena Renaissance Italian Palazzio where the lightness of Harold Budd meets Eraldo Bernocchi deep electronics. Beats and bass, drones and scapes ties together harmonically to meet one of the most emotionally involving piano player/composer.

Harold Budd
Harold Budd is one of the very few who can very rightly be called an ambient composer. His music, a sparse and tonal wash of keyboard treatments, was inspired by a boyhood spent listening to the buzz of telephone wires near his home in the Mojave Desert town of Victorville, California (though he was born in nearby Los Angeles). Though interested in music from an early age, Budd was 36, already married and with children of his own, by the time he graduated from the University of Southern California with a degree in Musical Composition in 1966. In 1976, Budd gained a recording contract with the Brian Eno-affiliated EG Records, and released his debut album The Pavilion of Dreams in 1978. Two years later, he collaborated with Eno on one of the landmark albums of the ambient style, Ambient 2: The Plateaux of Mirrors. He became a respected name in the circle of minimalist and avant-garde composers based in Southern California during the late '60s, premiering his works The Candy-Apple Revision and Unspecified D-Flat Major Chord and Lirio around the area. In 1970, he began a teaching career at the California Institute of Arts, but continued to compose while there, writing Madrigals of the Rose Angel in 1972. Harold Budd again worked with Eno on 1984's The Pearl. A contract with Eno's Opal Records resulted in one of Budd's most glorious albums, The White Arcades, recorded in Edinburgh with Robin Guthrie of the Cocteau Twins. Budd left Opal after 1991's By the Dawn's Early Light, and recorded two albums for Gyroscope: Music for Three Pianos (with Ruben Garcia and Daniel Lentz) and the lauded Through the Hill, a collaboration with Andy Partridge of XTC. In the mid-'90s, he recorded albums for New Albion and All Saints before signing to Atlantic for the release of The Room in mid-2000. In 2004 Budd decided to retire, claiming he had said all he wanted to, and that he "didn't mind disappearing." His final outing, Avalon Sutra/As Long As I Can See My Breath, appeared on David Sylvian's Samhadi Sound imprint as a double disc.

Eraldo Bernocchi
Born in Milan October 21th 1963. Around 1977, Eraldo started playing with some independent punk bands; finding rapidly the medium too limited he heads towards electronic experimental music. In 1985, together with Paolo Bandera and Luca Di Giorgio, he creates the audio conceptual project Sigillum S. 1987/1992, he spends five years general managing for tourism in the Far East for a leading wholesaler company. This kind of job enables him to travel most of the time, bringing him in contact with other musical expressions as well with eastern shamanic traditions. This will have a deep influence on his work in the future. Sigillum S quickly becomes an international cult act. Starts to create other projects like Ashes, a solo project. In 1993 together with the visual artist Petulia Mattioli, he creates the cultural project Verba Corrige Productions. It's aim is to provide for different artistic forms a sort of permanent laboratory where interaction could be total. Initial releases were the first Ashes album then Helix,a minimal electronic project. Collaborations with international artists such as Bill Laswell, Mick Harris/Scorn and Jim Plotkin. In 1994 together with Petulia Mattioli and Bill Laswell he creates SOMMA, an ideal meeting of shamanic rituals processed by electronic technology and dub cycles. Produces and remixes bands such as Trasmisia and RSU. Overload Lady (1997) is a drum 'n' bass album composed and produced together with Mick Harris on Sub Rosa.