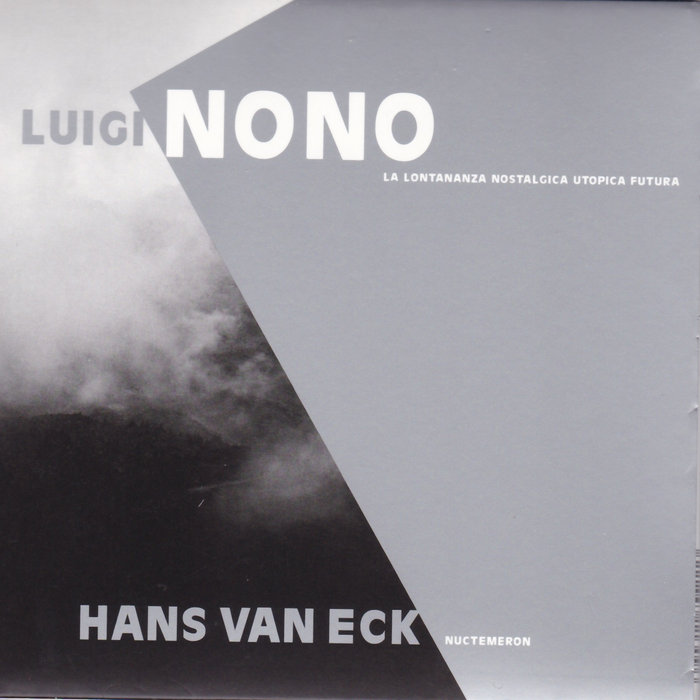 Part one - features Luigi Nono's La Lontananza Nostalgica Utopica Futura (1992), an original title, a unique aesthetic metaphor even: one could say that the past reflected in the present [nostalgica] brings about a creative utopia [utopica]; the desire for what is known becomes a vehicle for what will be possible [futura] through the medium of distance. Performed by Tiziana Pintus /violin and Hans Van Eck /sound projection (The Schreck Ensemble).

Part two - features Hans Van Eck's Nuctemeron (2008), a spiritual voyage as described in the text of Apollonius of Tyana (93 AD) which serves as the basis for the performance, connected by intermissions. Aspects of number symbolism, the four elements and the road to spiritual perfection have found their way into the music.

LUIGI NONO
Italian avant-garde composer of classical music who remains one of the most prominent composers of the 20th century. Nono studied with Malipiero at the Venice Conservatory (1941-5) and with Maderna and Scherchen, both of whom orientated him towards 12-note serialism (he married Schönberg's daughter Nuria in 1955). His avant-garde partisanship was inseparable from a commitment to socialism, twin aspects of a revolt against bourgeois culture: hence his avoidance of normal concert genres in favour of opera and electronic music, his frequent recourse to political texts and his work in bringing music to factories. His works include the operas Intolleranza 1960 (1961) and Al gran sole carico d'amore (1975), The cantata Il canto sospeso (1956), orchestral works and tape pieces. Much of his music of the 1950s and 1960s has a fervent lyricism; later works tended to be more pessimistic (Ein Gespenst geht um in der Welt, 1971).

THE SCHRECK ENSEMBLE
The magic of sounds is for me the most important aspect of music. the foremost goal of my compositions is to make the listener experience sounds as they are, taking him beyond the surface of the music. my musical style might be described as lyrical and colourful. the use of live electronics and soundtracks is so integrated in my way of making music that i cannot do without it. I co-founded the Schreck Ensemble with the late Arie Van Schutterhoef in 1989 in order to perform music that combines the use of acoustic instruments with the new sounds offered by modern computer technology. my music is published by mcn/donemus, amsterdam and can be found on the internet www.schreck.nl.