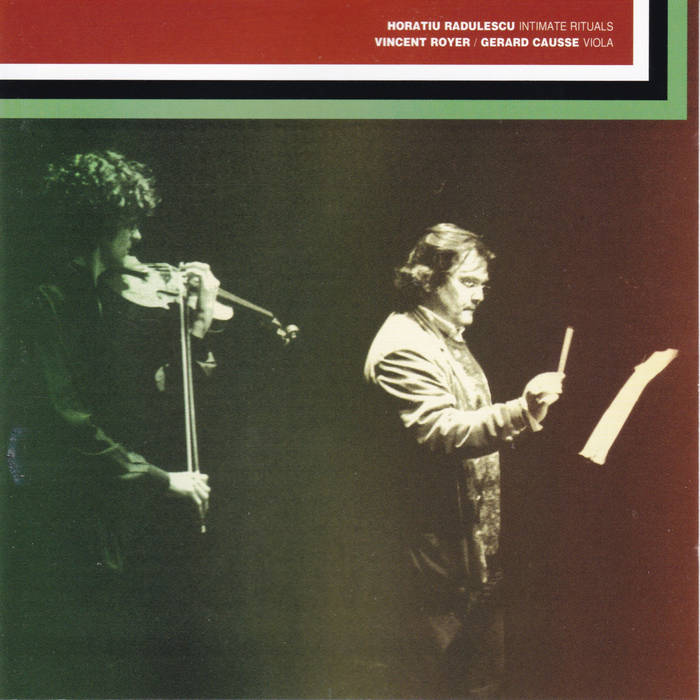 ddb Horațiu Rădulescu is one of the best composers of all time ever. Nobody has ever done quite what he has done. He is the only master of kind of art music that he invented. Favorite track: Intimate Rituals XI, Opus 63 (2003).

Intimate Rituals is the complete pieces for one or two violas.

It was released a short time before the death of the composer.

Gérard Caussé is known as one of the best musicians of his generation : Conservatoire de Paris, Quatuor Via Nova, (1969-971), Intercontemporain (direction Pierre Boulez). He has released more than 35 cds.

Vincent Royer (born in 1972) is the new generation. He has created pieces written especially for him (Luc Ferrari, David Shea, etc.), and plays in duo with Jean-Philippe Collard-Neven.

Horatiu Radulescu born in Bucharest, 1942, is a noted composer, having developed his spectral technique of composition in the late 1960s. This technique "comprises variable distribution of the spectral energy, synthesis of the global sound sources, micro- and macro-form as sound-process, four simultaneous layers of perception and of speed, and spectral scordaturae, i.e. rows of unequal intervals corresponding to harmonic scales."

The first work to result from these new ideas was Credo for nine cellos, composed in 1969. Radulescu developed these ideas further in a large catalogue of works (now spanning more than 100 compositions), including six string quartets, five piano sonatas, a piano concerto, and many works for unconventional ensembles. In 1974, Radulescu became a citizen of France, having lived in Paris since 1969. He presently lives in Switzerland.

"In 2003, I composed Intimate Rituals XI (a work for viola) using the tape of the pre-recorded sound icons with a viola in a spectral scordatura, a very special tuning-chord; the open strings simulate the 3rd, 4th, 13 th and 20 th harmonics of an F monesis, giving C half-sharp, F half-sharp, a slightly lower D, and A half-sharp. With this scordatura you have also the presence of the 7th harmonic in the air; the 3rd and 4th harmonics in sum give 7, and the 13th and 20th harmonics in difference also give 7. So the 7 th is there too, in the subconscious, even though it is not directly present. The piece is dedicated to Vincent Royer; it was composed in Clarens / Montreux, in 2003 and premiered by him in Chicago. The timing is very strict; the techniques are those already known from Das Andere and Lux Animae but otherwise activated; the macro-form is also directed by the Fibonacci proportions. The viola is in a constant dialogue with the sound icons (I don't like to think of the piece as viola and tape; ideally the sound icons would be live). The viola and the sound icons are dependent on each other, sometimes crossing, sometimes not. There are very intense moments as the sound icons describe a high register climax at the Golden Section; the viola attains its highest sounds there too and then decays, very strangely, reaching again in the low the richest timbres. Intimate Rituals are very private, maybe even erotic, situations. From the original recording of the sound icons in the Lucero studio in Versailles in 1986 to the premiere of Intimate Rituals XI with the viola in 2003 is a big span of 17 years, but the same atmosphere should be achieved, a sort of spiritual intimacy."

From the very beginning, Rădulescu's musical concepts, and the techniques he invented to realise them, were unconventional. For his final exams in Bucharest he composed the orchestral work Taaroa, named after the Polynesian god; this displeased his teachers, who found the idea "mystical" and "imperialistic" (Rădulescu, quoted by Krafft 2001, 47); the only member of the faculty who supported him was the composer Anatol Vieru.

Rădulescu's spectral techniques, as they evolved through the 1970s and beyond, are quite distinct from those of his French contemporaries Gérard Grisey and Tristan Murail. His compositional aim, as outlined in his book Sound Plasma (Rădulescu 1975) was to bypass the historical categories of monophony, polyphony and heterophony and to create musical textures with all elements in a constant flux. Central to this was an exploration of the harmonic spectrum, and by the invention of new playing techniques the aim to bringing out, and sometimes to isolate, the upper partials of complex sounds, on which new spectra could be built.