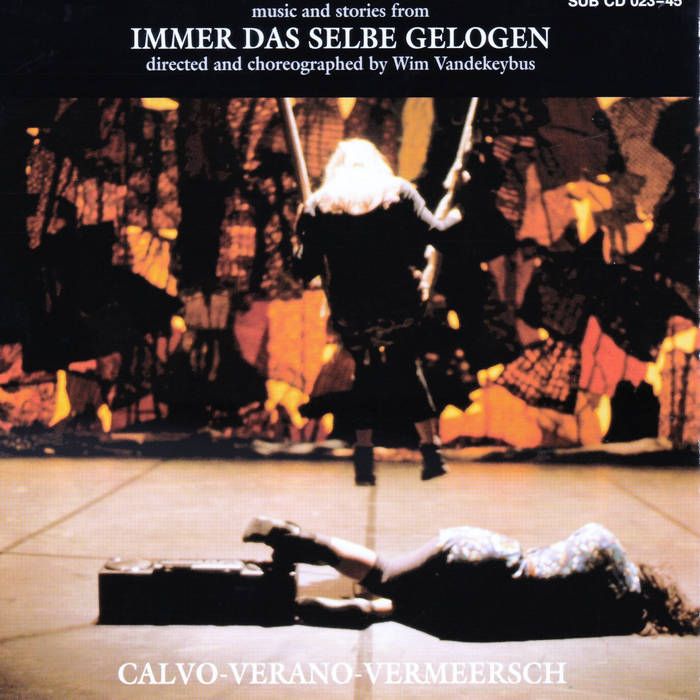 willy vlyminck I am a big fan of X-Legged Sally, unfortunately they only did play a few songs on this work, but that was enough to justify the buying of this download. To Peter Vermeersch I like to say, please release the complete works of X-Legged Sally, thank you: Favorite track: Laut and Leise.

Director, choreographer, actor and photographer Wim Vandekeybus was born on June 30th, 1963 in Herenthout (Belgium). Brought up in a rural environment as a son of a veterinarian, Vandekeybus was often in contact with animals in their natural environment. These experiences had a great emotional impact on him. Animals, their movements, their instinctive reactions and their trust in their own physical power are often integrated into his performances. He began his studies in psychology in Leuven, but did not complete them, irritated, as he says himself, by the surplus of 'objective science'. His interest in the complex relationship between body and spirit remained. A workshop with the Flemish theatre director and playwright Paul Peyskens brought him into contact with theatre. He followed some dance courses (classic, modern, tango) and took up film and photography.

In 1985 he auditioned for Jan Fabre. Vandekeybus was chosen and during two years he travelled the world with the The Power of Theatrical Madness, playing one of the two naked kings. While touring with Jan Fabre he met painter/photographer Octavio Iturbe in Madrid, who later became an important artistic collaborator. In 1986 he withdrew for several months in Madrid with a group of young, inexperienced dancers calling themselves Ultima Vez (Spanish for 'Last Time') to work on his first production. In June 1987 What the Body Does Not Remember premièred at the Toneelschuur in Haarlem (the Netherlands). The dancing in What the Body... was powered by the music of Thierry De Mey and Peter Vermeersch. With tempestuous energy and strength the performers made daring leaps, launched themselves into the air and smartly intercepted each other's falls. Bricks were thrown above each other's heads. Every gesture had to stick to an absolutely precise timing; the performers put their trust in and surrendered to their instincts. Since What the Body... Wim Vandekeybus has created nearly twenty performances with changing international casts and has made nearly as many film and video productions. From his very first performance, music has been an important stimulus for his productions. He has commissioned works from, among others, Peter Vermeersch, Thierry De Mey, David Byrne, Marc Ribot, Eavesdropper and David Eugene Edwards.

Immer das Selbe gelogen (1991) was a sensitive portrait of 89 year old German variety artist Carlo Verano and of Vandekeybus' friendship with the man. While the first performances are characterized by a lack of coherence or storyline, more narrative and theatrical elements crawl into his creations: texts, literary, mythological and philosophical references.
In June 1992 Wim Vandekeybus and Walter Verdin directed La Mentira, a dance video based on Immer das Selbe gelogen, recorded at deSingel in Antwerp, and in the rough and deserted landscape around Granada in the south of Spain.

If you like Immer das Selbe Gelogen (directed and choreographed by Wim Vandekeybus), you may also like: