by Recorded by Juancarlos Barrios 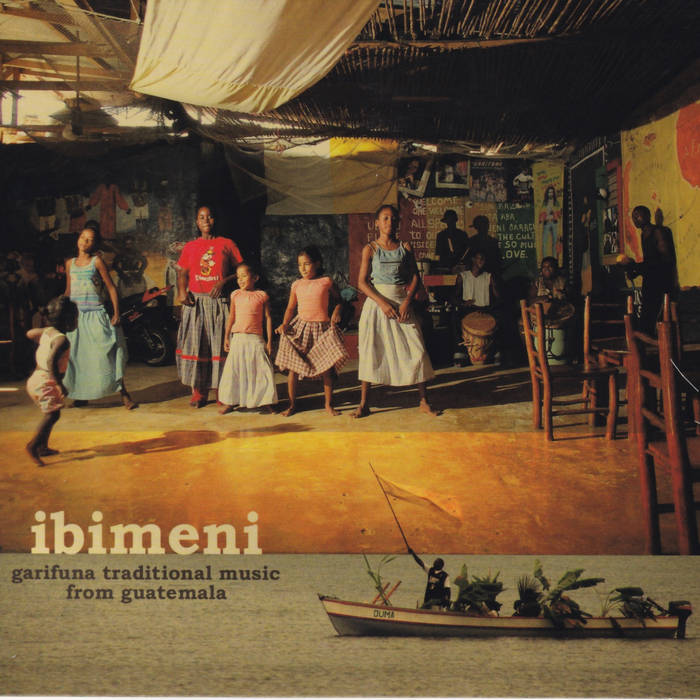 Recorded and produced by Juan Carlos Barrios (aka Radio Zumbido)

The Garifuna musicians & dancers from Livingston, Guatemala. Ibimeni a term associated with childhood and youth, means honey or sweetness in Garifuna. Ibimeni is also the name of a group of Garifuna musicians and dancers from Livingston, Guatemala, who interpret their traditional sounds in this album. This collection includes lullabies, festive chants, processional marches, and songs of religion and labor. Livingston is a small region located on the Caribbean coast at the river mouth of Rio Dulce, Guatemala. it is accessible only by boat or airplane. this isolation allows the conservation of many cultural elements, such as music and dance.

Ethnogenesis and location of Garinagu

A series of villages inhabited by the Garifuna (plural, Garinagu) are located throughout the coasts of the Gulf of Honduras, (Belize, Guatemala, Honduras and the Laguna de Perlas -Nicaragua-). The Garinagu are the afro-amerindian people with the most transnational presence in Central America. With a particular ethnogenesis, produced by the encounter of Caribs and Arawaks in the Lesser Antilles, they remained throughout the conquest period, due to the race mixing with black slaves. Constituted as "Maroons", as a clear resistance against the English, they were the protagonists of the so called "Caribbean war" during 1795 and 1796 in Saint Vincent Island, from where they were defeated and later deported to Central America in April 1797. After being abandoned in Roatán (Bay islands) soon they negotiated with the Spanish crown to be transferred to Puerto Trujillo, in continental lands, where they started to scatter to the east and west. They established their own lands through the edge of the coast of the Honduras Gulf. Halfway through the twentieth century they began their migration to the United States. Today it is hard to explain and understand the configuration of social and cultural relations of Garinagu without incorporating the relationship that they hold with their ancestors.

Garifuna's music and the dancing expressions

Music and dancing -vehicles of religiosity- are central in the Garifuna culture. This musical expression is based on the group of two, three, and even four drums "garaon" (primera -the high pitched- and segunda -the lowest-) and sonajas "sisiras" that interpret rhythms accompanied by a solo singer and a choir that repeats a verse. The relationship between the primera drum-rolls and the dancer is that the dancer responds to the movements made by the drum as if it was a dialogue.
Jointly to the polyrhythmic universe of Garifuna drums, they cultivate another intense field of musical expressions that plays an important role in society, most of the time of ludic and recreational character.

The late lamented Andy Palacio and producer Ivan Duran are the men to thank for bringing a sensitively rendered modernity to the music of a people who are spread over Honduras, Nicaragua, Guatemala and Belize as a result of their ancestors' deportation over a century ago from St Vincent in the Caribbean, from which they'd arrived via a 17th Century slave ship which crashed off the coast of the island. The Duran-produced releases Watina and Umalali (on the Cumbancha label) were based on the Garifuna songs of Palacio's home country of Belize, and the roots of that music is laid bare here in the traditional songs of neighbouring Guatemala.  The whole range of Garifuna music is here - to the now familiar raw, appealingly off-centre female call-and-response vocals and loping reggae-lite rhythms, are added rocking horn-led "bandas" songs, deeply expressive liturgical mantras (there's a strong thread of Catholicism amongst the Garifuna people) and oodles and oodles of polyrhythmic dance music, the West Africa-meets-Caribbean-mento punta style being the most common.
There isn't as much acoustic guitar on Ibimeni as there is on Watina (although when it arrives, it's usually twanging good fun) but apart from that, you can draw a direct line between this and those acclaimed albums.
It's tuneful, rhythmic, life-affirming stuff and redolent of the unique Afro-Amerindian culture in which it is steeped. If you're sufficiently intrigued by the Cumbancha albums to want to seek out their rawer antecedents, here it is in all its raw, rootsy glory, a recording to make the late great Andy Palacio proud to have opened the door to its release.
Con Murphy / Sunday 30 November 2008