I Could Never Make That Music Again 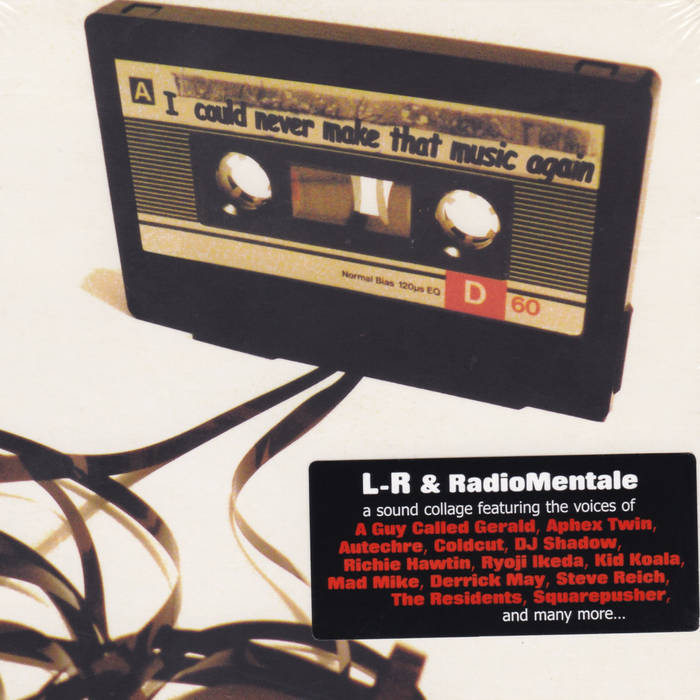 Published in 2007, I Could Never Make That Music Again is a choral album, a sound collage crafted out of interviews,where artists, musicians, DJs and sound makers talk openly about their work, their visions, their hopes, their moments of doubts and their regrets in a loosely constructed narrative. Even though most of the people interviewed here have just met on a few occasions, they have all participated in the making of the history of electronic music; from the early tape experiments in the 1950s to the latest trends in techno. Derrick May and Stacey Pullen, the pioneers of Detroit techno, reply to an audio letter recorded in 1966 at the Phillips research laboratory in Holland by Fred Judd talking to a certain Tom Dissevelt about the lack of commercial interest in electronic music. Thirty five years on the musicians of today air their thoughts on the subject. Steve Reich and The Residents swap anecdotes, DJ Shadow chats to Coldcut, Rioji Ikeda to Richie Hawtin. Autechre reflect on the beauty of machines, A Guy called Gerald ponders on the cosmic realms of sound, Aphex Twin remembers his dreams, and Mad Mike from Underground Resistance marvels at the forces of Nature.

Musician and author David Toop reflects on the act of listening, and Matthew Herbert plays around with everyday sounds. The music that accompanies, underlines, perturbs and enriches this flow of words, mirrors the sonic environment that surrounds us.. Everyday sounds, samples from hit records, disturbing frequencies and banging machines converse with this polyphonic chorus of voices and memories.

Co-written by Jean-Yves Leloup, Eric Pajot and Jean-Philippe Renoult, I Could Never Make That Music Again begun as a series of interviews made between 1990 and 2004 for the French music press (the magazines Coda and Trax) and were an integral part of the book 'Global Tekno' ( co -written by Renoult and Leloup). They were also aired on the infamous Parisian electronic music station, Radio FG and on the public radio station France Culture.. Over the past fifteen years Leloup and Pajot have been working together as RadioMentale (originally a radio-art show on FG) and in 2000 Renoult launched 'Sonotales', an experimental radio workshop originally broadcast on France Culture.

This double approach is what makes this album unique and original. Historical archive, articles, sound creations and musical fragments intertwine and form a hybrid work that could remind some people of the heyday of radiophonic creation on both the BBC and Radio France. I Could Never Make That Music Again is a radio-art piece that remixes musical criticism and sound innovation and places all the ideas born out of the late 20th century cultural and technological revolution on an equal footing.

Jean-Philippe Renoult
aka SonoTale, Jopo Stereo, L-R - (electroacoustics, tape music, plunderphonics). His work is as equally influenced by the early avant- garde cut up works of the 20th century and the turntablists and DJs from the '80s up until present day. His compositions blend electronics with field recordings, voices and noises from a variety of musical backgrounds. These tiny audio fragments are then tuned, detuned and mixed together to become part of what he calls, a sample dust environment. To create these sound works, he never uses MIDI, just tapes, a multi-track recorder, a computer and a few effects. He has worked as a radio producer for French public radio for over fifteen years. He also curated and presented the "Voir et Entendre" (See and Hear) cycle of lectures at the Pompidou Centre Paris, and conceived "Sound Drop", an ongoing series of curated audiowalks in Europe. In 2005, he founded the sound-art duo L-R with Jean-Yves Leloup..

Eric Pajot
born in 1966, lives and works in Paris. Sound and visual artist, musician, he used to work also as a computer graphic and website designer. He has released several singles on independant Parisian labels, and has also composed movie soundtracks for directors such as Olivier Dahan and Frédéric Comtet.

RadioMentale
With Jean-Yves Leloup, Eric Pajot founded RadioMentale in 1992. It can be seen as an influent sound- system on the airwaves, clubs, urban spaces, web, galleries & art centers. In the early nineties, RadioMentale has been broadcasting their own cult radioshow in Paris on FG (and also on Swiss station Couleur 3 and Japanese Shibuya FM).
After having participated to the rise of the electronic scene in Paris, they work now on very different mediums : environmental pieces for contemporary art exhibitions, movie soundtracks, sound installations, specific soundpieces for radio shows, websites, CDs or urban spaces, multimedia movie performances, and also sound-design for public commercial venues. A RadioMentale performance or piece is a mix drawing on an eclectic range of audio sources, including movie soundtracks, ambient, experimental & electronic music, natural sounds, dialogues, sound-collages. They also work as experimental DJs and produce specific sound environments as they did in several contemporary art exhibitions and venues such as Documenta X in Kassel, Pompidou Center, Nikolaj Center in Copenhagen, Le Magasin in Grenoble, Cartier Foundation, Mudam... They have also released a long-form soundtrack/audio collage entitled «"The Cut-up Scenario»" on the label MK2 Music.