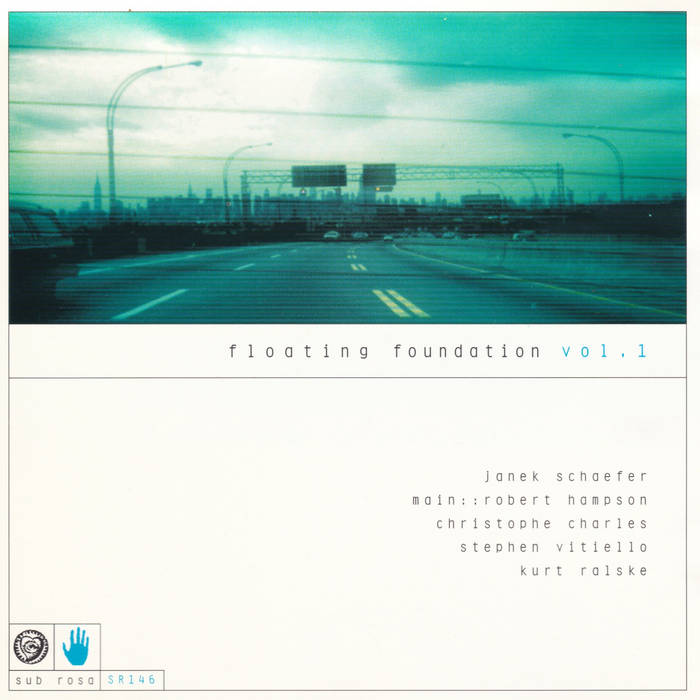 Leaving aside controversy and scandal, Frank Lloyd Wright built a huge hotel in Japan between 1916 and 1922; a few months later, Tokyo was devastated by an earthquake. Only a few buildings stayed up - amongst which the Imperial Hotel. When asked how his construction had remained intact, he replied: Floating Foundation. In this case as in others, he had thought and assimilated the nature of nature. What must be done now is to apply this principle to other areas of creation.

Likewise, the idea which preoccupies us in this series, is to create sound objects, abstract in their appearance, with musicians who are, in most cases, plastic artists too - the border between music and plastic arts is thinner than ever before. This is what we will try to explore for the time being.

Janek Schaefer
Based in london as architecte and musician. After his 'Above Buildings' , he worked with Robert Hampson on a project called Comae', also he invented the Tri-Phonic Turntable.

Robert Hampson
Founder of Loop and Main - a seminal musician from south london. he produced about 12 records from early 90 and participated to the 'Gilles Deleuze unit' with Scanner mid-90.

Christophe Charles
French sound plastician living in Tokyo, close in mind to Markus Popp / Oval - he released "undirected 1986-1996 " on Mille plateaux and "dok " - a soundfile exchange between Oval and him.

Stephen Vitiello
Born in New York City in 1964,. His work has been featured in group exhibitions at Whitney Museum and Postmasters Gallery, in New York. A musician and media-artist, he is involved in the New York avant garde,. He was also a close collaborator of Nam June Paik.

Kurt Ralske
Kurt Ralske is a Manhattan-based composer, electronic musician, and computer audio-video artist. Described by Alternative Press as 'proving that machines do indeed have souls' - founder long time ago of the mythic Ultra Vivid Scene (on 4AD)

PRESS CUT
The aim of the Floating Foundation series is to "create sound objects" with musicians "who are, in most cases, plastic artists too" (from Sub Rosa director Guy Marc Hinant's presentation) -- in other words, to walk the thinning line between music and plastic arts. The sound sculptors contributing to this first installment all decided to take its title (inspired by Frank Lloyd Wright's sense of architecture) literally. Each piece is a journey through either air or water -- not that the artists declare to specifically use sounds derived from these sources, but their music feels airborne, free-floating, gentle, and following its own, sometimes capricious path. Janek Schaefer's "Lithospheric Shifts" opens the CD, but it represents its weaker point. It doesn't take off, offering a limited and uninvolved scope of sounds. Robert Hampson's (aka Main) "Hysteresis" is already more interesting and takes the shape of a British-school electro-acoustic work. Christophe Charles and Stephen Vitiello's contributions make for the best moments, the former vaguely ambient, the latter presenting the most minimalist but sharply focused work, derived in part from his recordings of the World Trade Center (something that cannot help but take an unplanned extra dimension after the events of September 11, 2001). This is where the sense of plasticity, of "sound sculpting," can be felt the strongest. Kurt Ralske's "Au.Taste" provides a suitably calm ending.
François Couture, All Music Guide