EARR plays a Snare is a Bell 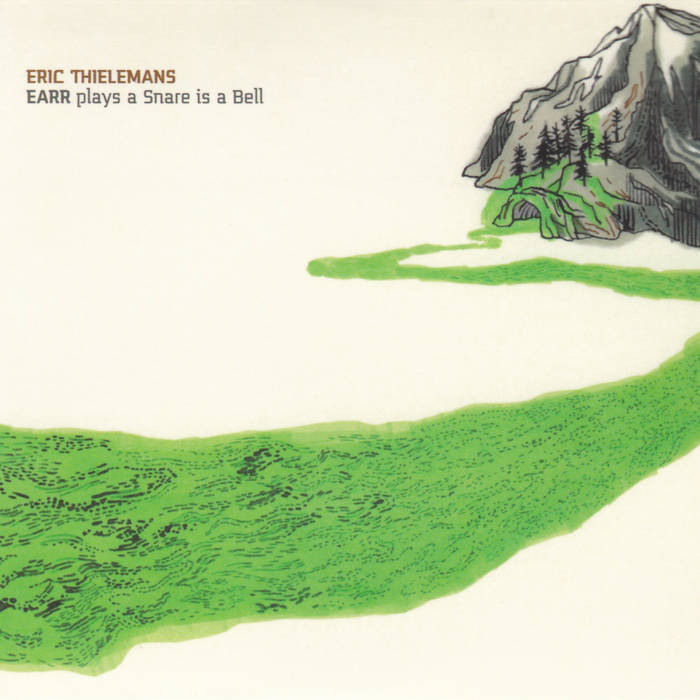 Yes, it certainly is a walk you propose to us with this recording. A walk into place and sound, into a place through the sound, into a sound via the place. Your instrument is this place and your snare drum really brings to live the surroundings like the bow enlivens the violin or a reed needs the mouthpiece of a clarinet.
As a result I've been very sensitive towards experiencing musical time and space. Olivier Messiaen's highly appreciated organ player, Louis Thiry on A Snare is a Bell.
A Snare is a Bell is a solo piece for snare drum, voice and the room in which it is played.
Inspired by some close encounters I had with African shamanic/trance musicians and my personal experiences with meditation and music, it also relates to a known-to-many-of-us acoustical wonder of sitting on the toilet and picking up the tone of that little room (often by accident while coughing or talking out loud to oneself) and enjoying to sing that tone and let the toilet become filled with an enormous resonance. Well...it sure does happen to me from time to time... So the roll on the snare drum is my practice. My daily exercice and meditation.
Also, it is simple: I'm playing a roll on a snare drum, which has been done many times and a long time before me. Like baking cookies with a simple recipe, right out of grandma's cookbook. This basic aspect has the pleasurable result of freeing me from the idea of needing to be special. Or in other words, the fascination of this work, for me, does not lie in it's unique composition or incredible virtuosity to play a roll, but in how what I hear, when doing this roll, touches me, changes me, guides me, every time again.

EARR plays a Snare is a Bell

EARR plays a Snare is a Bell, is a revisitation of the roll and it's overtones by an ensemble of musicians with very different musical backgrounds. The choice of musicians is above all a heart thing. I love hearing and seeing what they play. I like their recipes and the special cookies they bake. And I like sitting down and watching the stars with them.
"So It started again with my snare drum and voice in a room, and we all listened and added voices and sounds to what we were hearing. As if we were all fishes in a stream. Sometimes just swimming, sometimes wanting to show ourselves, wanting to be heard, making sounds and noises, adding to that stream, sometimes just floating, breathing, hanging in there. And sometimes we heard not only single sounds but many sounds together and sometimes we heard a song. And we started to think about where all these sounds, songs and noises were coming from. And where they were going to. And we thought of all those recipes in all our grandmas' and grandpas' cookbooks, and all their grandmas and grandpas, and we started to feel simple and happy.
Happy fishes in a big stream, watching the stars."

Genre crossing/ blending percussionist/ drummer working from a classically trained ear via jazz drumming, free improv and all sorts of contemporary musics towards his own realms in music and performance. Being a teenager in the mid eighties of the 20th century, for him, as for many of his generation, multi disciplinarily is an evidence.
From his first moments of active musicianship up until now, Eric Thielemans always has been interested in performing arts, theatre, poetry and dance. Consequently he has worked with a wide range of (sound and visual) artists, performers and dancers.
Currently plays in lidlboj (Jozef Dumoulin's eclectic post jazz playgarden), Jozef Dumoulin trio with Trevor Dunn on bass, Tape Cuts Tape (a trio with Rudy Trouvé known as founding member of dEUS and Lynn Cassiers aka singer of lidlboj), rops, snare et les autres (concert/ballad) with Josse De Pauw, Rudy Trouvé, and Wim Lots, The Love Substitutes, Jean-Yves Evrard's trio, Kaat Helling's band and his own EARR (Ensemble Artists Repertoire Research) with Claron Mc Fadden, Jean-Yves Evrard, Peter Jacquemyn, Jozef Dumoulin, Hilary Jeffery and Jorgen Cassier.

Other collaborations and work in progress include following artists: Alexander Berne, James Harrar (Cinema Soloriens) and Marshall Allen (Sun Ra), Daysuke Takaoka, and Louise Landes Levi.
For the past 3 years he has been focussing on the development of a body of solo works on percussion. His first acclaimed solo work "a Snare is a Bell" was released on vinyl in 2008 on the Antwerp based label Ultra Eczema (UE49). Besides this work Eric Thielemans is active as a producer and teacher/coach. In 2011 he produced "Hit of The Century", Kaat Hellings' new release. In the past ET produced both albums of Ghalia Benali's "Romeo & Laila" and Maak's Spirit's "Stroke". Eric was the drummer of the adventurous avant Jazz band Maak's Spirit for 9 years until March 2008
and before that of the Ben Sluys Quartet for 7 years.

Ensemble Artists Repertoire Research founded by Eric Thielemans in 2008, is a contemporary chamber music ensemble focussing on research and development of a new original music repertoire.