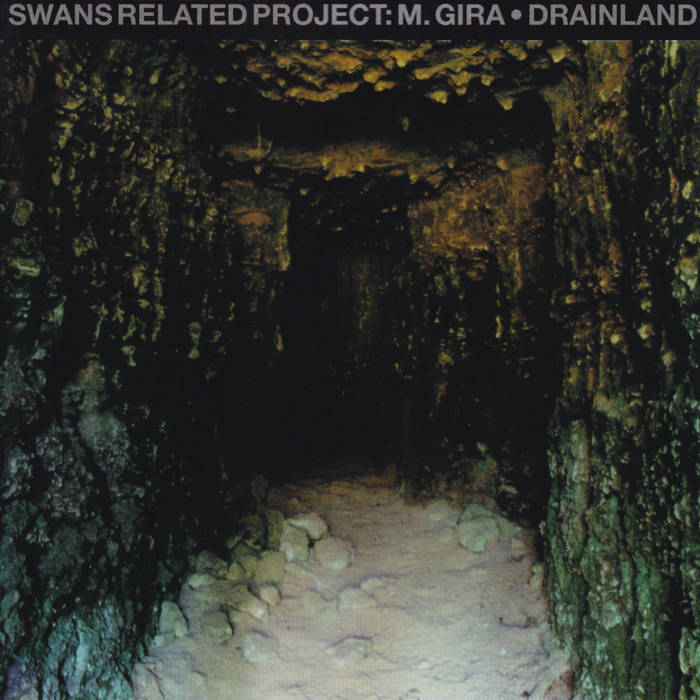 Shark Tale So this just became one of my favorite albums all of a sudden. Every track on this album is just so great. Very dark and brooding stuff. Favorite track: I See Them All Lined Up.

MICHAEL GIRA
The man behind SWANS is Michael Gira and only Michael Gira. Over the years his music has changed, has become less heavy, less loud, more complexe and melodious - but still uncompromising, with this characteristic visceral force. His deep bass voice, exploding or mumbling, still is one of those mysteriously sad voices that exist. He is this false cynical chronicler of all those who got stuck in the verge.

DRAINLAND
Subtitled '10 songs by M. Gira', Drainland is Michael Gira's first album - and it is in close connection with his first book 'Empathy & Other Stories" published by HENRY ROLLINS (on 2.13.61). Here, Gira lifts the veil even more on what is surely his most autobiographical record to date. For these songs he got the assistance of JARBOE and BILL RIEFLIN (Ministry), with the special participation of ANTON FIER.

Given how Gira made Swans such a personal and broad-ranging vehicle for his art over the years, it would have been more than understandable if Drainland, released as a complement to Jarboe's album from the same year Sacrificial Cake, turned out to be Swans redux album as a result. As it happens, it's less of a mixed bag than Jarboe's own musically varied solo efforts, yet it has distinct strengths. Assisted by Jarboe and late-period Swans member Bill Rieflin, at whose Seattle home most of the album was recorded, Gira brings his expected bleak, alienated but still heartfelt lyrical visions to the fore, steering away from the full, epic grind of Swans and towards a variety of more restrained musical visions. "Where Does Your Body Begin?" is one of the more overtly Swans-like tracks, recalling gentler yet dark efforts such as "Failure" with acoustic guitar at its center; similarly acoustic-based tracks include "Unreal" and "Your Naked Body," though they all have various extra instrumental touches - keyboards, samples, even what sounds like mooing cows at one point - to fill out the pieces in an intricate fashion. "I See Them All Lined Up," in contrast, consists almost solely of a bassline/percussion sample with plenty of silences throughout over Gira's near-spoken vocals. Perhaps most revelatory of all are the flashes of humor at points: "Fan Letter" is particularly coruscating yet sometimes intentionally over the top rip on rock star culture and expectations married to a weirdly jaunty keyboard and odd vocal noises; "Why I Ate My Wife" has one of the funnier titles around. While "Low Life Form" sounds the most like a Swans track, the closing number, "Blind," actually is a Swans song. Taken from a session for the White Light album, it wraps up Drainland on a gentle, softly string-laden note. Notes from iTunes.

Drainland is a 1995 obscure solo album by me, co-produced by the lovely Bill Rieflin and myself, with musical contributions from Bill and Jarboe. Spare arrangements (recorded in Bill's living room) with the focus on words. Some of this is pretty damn good. Some of it isn't. Ha ha! "You See Through Me" features a surreptitious recording by Jarboe of a drunken rant by me. I think I discovered the cassette one day in a drawer in her desk and decided to use it for a song dedicated to her ("you see through me"). Of course it's incredibly embarrassing to include on an album made for public consumption, but I thought it a legitimately good recording - a good "performance" in a way, despite the fact it was of slovenly, spiteful me. It could have been anyone. Well, maybe not. Prescient, it's subject was money. Anyway, it was just "material" and everything's fair game. In the end, it was an honest homage to Jarboe, though most people failed to notice that. "Fan Letter" and "Unreal" are seen from the perspective of a crazed fan's inverted worship of Madonna. " I See Them All Lined Up" (later re-recorded for Swans) is a naked hate/revenge diatribe, some of the most vile words I ever wrote. I apologize to all concerned. Thank god it's not too obvious who the subject of my hatred was.... This album was and still is graciously released through Mr. Jello Biafra's Alternative Tentacles label. Photography by the esteemed Mr. Wim van de Hulst.