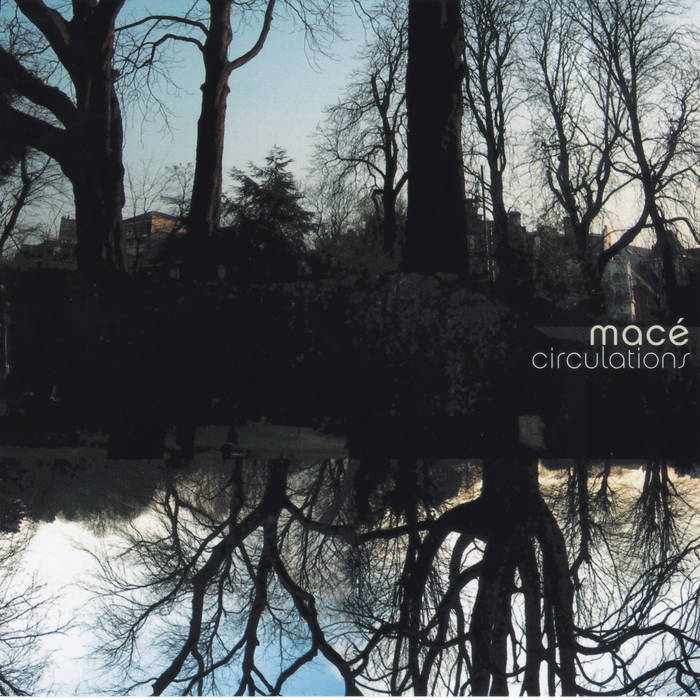 The 2nd CD of the french French musician Pierre-Yves Macé (following Faux-Jumeaux released on Tzadik) pushes faraway the limits of contemporary and electronic music. He developed the auto-sampling process around the concept of the double or replica, creating correspondances between the instrumental part solist (percussion, electric guitar, harp, clarinet) and his electroacoustic future.

Following Faux-Jumeaux, where I developed the auto-sampling process (composing a piece of music using only samples of the instruments appearing in that piece of music) around the concept of the double or replica, I chose with Circulations to push the same method much further by approaching it from a more pragmatic angle. Its composition, developed in residency at Euphonia/Grenouille in Marseille.

From INSOUND : reviewed by Max Schaefer

Circulations seems in awe of how a person or musical event, once groundless, begins to give itself a content or place of grounding; it is a work interested in the relationship aspect of experience and how - without reason or premeditation - one casts out into the world and brings back limitations, forms and values. French musician Pierre-Yves Macé forges such a path by proceeding with four largely impulsive movements for percussion, guitar, harp and clarinet and bringing them into interference with live processing.

Much like a genial conversation, there is interchange and blending, yet neither aspect loses its character; both traits manifest more clearly when meshed. Each composition sketches chapters that from conception to conflict, denouement to resolution, maintain a particular rhythmic movement; there is a degree of unity and distinction to each episode. Continued acceleration is breathless, preventing parts from achieving distinction; the self-identity of each chapter lends definiteness and interesting peculiarity. The first piece, for instance, opens with the infrequent rattle of a snare drum rushing out from a forest of silence. It is stained by a metallic tone, humming in the tree-tops at higher registers and sending the once boisterous drum pattern back into the mossy foliage of feedback and chirping tape hiss. As the movement reoccurs, the contrasting elements grow more defined in their relation to one another; the atmosphere suggests a vast metallic tundra filled out with dangling flute icicles, howling guitar winds and tiny melodic buds trying to bloom through the frost.

Truly, one may take appreciation in Circulations for more than merely its theoretical presence. The fluffy, single-stringed guitar motifs of the "2nd Movement" walk solemnly across a dewy grass of electronics while a fine dust of ambience is seen in a shaft of light, stirred by the hurried passing of croaking crickets. On the "3rd Movement" for harp, meanwhile, aspects almost fail to register altogether. Turn it up and the piece reveals itself to be a finely shifting mist of bell-like overtones and what sounds like the soft tooting of baby owls. As a piece of music, it's pleasant enough, but its power lies in its elusive structuring and how it subtly frames and colors successive events.

These descriptions aside, by and large the emotional element of Circulations is not representational; its arrangements do not refer back to the ordinary emotions of life - they exhibit concern purely for the shapes of forms, their relations and quantities and qualities. In this way, Macé strips music back to its most basic timbres before building it back up with driving oscillations.