Break Through In Grey Room 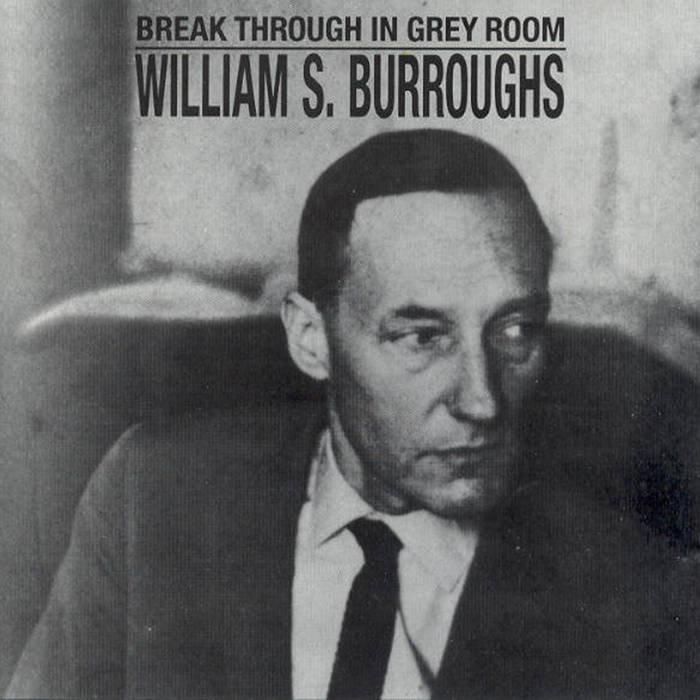 CUT UP TAPES
Officially re-released - one of our absolute classics, back in print at last. Extraodinary cut-up voices recorded during the mid-60's in hotel rooms in New York, Paris, London... It's impossible not to recognise the writer's voice - the sonority of this voice - a sonority also present in the silence of every text he wrote. An explosion of styles -a blasting of borders - the silence after a gunshot - the overtaking of the fetishized word - from the exploded painting to the cut tape. This record starts with a piece of more than 13 minutes, recorded around 1965 with Ian Sommerville somewhere in New York and London - K-9 was in combat with the alien mind-screens, including various monologues, radio short waves and music...
Tapes, cut and cut and cut up to the limit of sense - emerged new structures of communication... and senses. Words gain power when loosing the boundaries of semantics. Also includes Joujouka music recorded by WS Burroughs in the hills of Morocco with Ornette Coleman, circa 1973.

HISTORICAL INTRODUCTION
During the 1960's William Burroughs was in Europe and England. The Vietnam War, the Cultural Revolution, hippies and the acid gospel, the U.S. in tumult, all these were dispatches to him. Living between Paris and London, his only excursions to America were in 1965, when he lived a year in New York at the Chelsea Hotel and 210 Centre Street, and revisited St. Louis and Palm Beach; and in 1968, when he covered the Democratic Convention in Chicago for Esquire in the company of Genet, Southern and Seaver. Burroughs had quit the States in 1953 exactly because he foresaw these police-state conditions.
But now the wild boys were in the streets, in London and Paris too, and Burroughs was inspired to hope that the world could really change. In the creative world-switchboard of the Beat Hotel, in various London hotels, in a house in the Arab Quarter of Tangier, he experimented with tape recordings, hoping to cut the pre-recorded time line of present time, and let the future leak through.
Many of these tapes are as much lan Sommerville's work as Burroughs, or even more. lan's technical background tribute to the early development of sound-and-light shows in London, and at one point, he worked in a studio furnished by Paul McCartney.
Ian was a sorcerer's apprentice, and the other sorcerer was the late Brion Gysin. The development of all the early cut-up techniques was a pure collaboration between Gysin and Burroughs. lt was Brion who led the way on a crusade to rub out the word, and with Anthony Balch the cut-up was applied to film, in Towers Open Fire, The~Cut-Ups, and Ghosts at No. 9.
It is a long way back to the 1960's, and sometimes hard to remember now the sense of urgency and revolution then of danger of discovery, that informed the literature of opposition. That there is now, in1986, a market for these archival materials now seminal, even though it has been little distributed until recent years. And with such current national obscenities as the Meese Commission Report on Pornography, the War on Drugs crusade, the PMRC hearings for censorship of record albums, the Supreme Court sodomy decision, and the yelps of the Christian far-right and the like, surely a new literature of opposition is in the making.