Black Star at the Point of Darkness 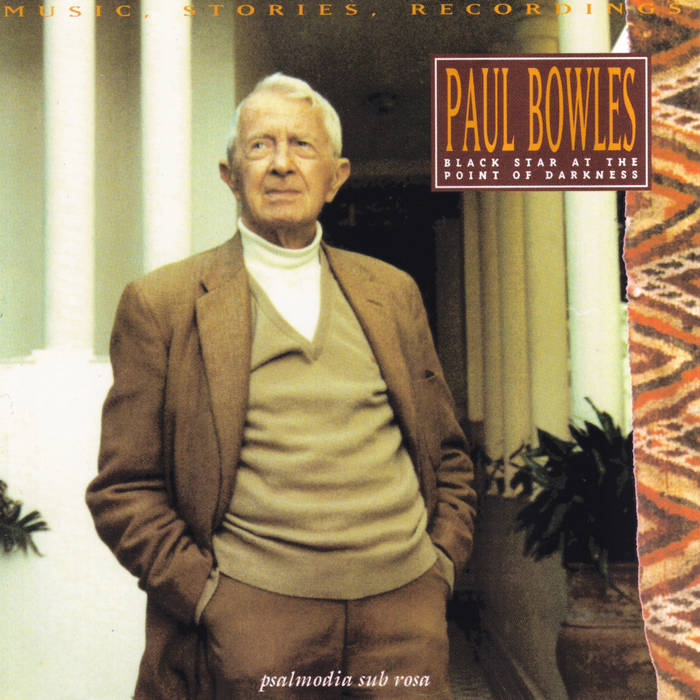 This is the first part of three, dedicated to Paul Bowles with his active participation. Recorded by Randy Barnwell and produced by Sub Rosa. Including his texts, poems and short novels, his own field recordings and his own music. With the participation of the painter and storyteller Mohammed M'Rabet + rare music played by Jean-Luc Fafchamps.

BLACK STAR AT THE POINT OF DARKNESS
Recorded in Tangier especially for Sub Rosa, this album is a unique kaleidoscope of Paul Bowles' talents. The writer, musician, musicologist and wanderer is here in the full diversity of his work. We hear his voice reading poems and short stories, his recordings of ritual Morrocan music and, what he himself considers one of his most accomplished works, the Six Preludes for Piano performed by Jean-Luc Fafchamps in a sensitive contemporary interpretation. As the wind howls over the roof at noon, do not be afraid, the Invisible Spectator will be at your side.

TANGIER
In Tangier the author of The Sheltering Sky, Let It Come Down and many brilliant short stories was visited by William S. Burrroughs, Allen Ginsberg, Gore Vidal, Tenessee Williams, Gregory Corso, Brion Gysin, Ira Cohen and become an unofficial "guru" for the beat generation and many major avant-garde writers. He also translated into English a collection of stories by Mohammed M'Rabet, a native fisherman and storyteller with who the expatriate American couple developed a close friendship.

PAUL BOWLES
Bowles was born in New York in 1910. When he was 17, the Paris-based avant-garde magazine Transition published some of his poems. Bowles went to Paris, met Gertrude Stein and quit school to become a writer. In 1931 he studied music in Europe with Aaron Copland. In 1938 he married Jane Auer, herself a gifted novelist and playwright, who was to achieve literary fame. After the war, they settled in Tangier, which is now Paul Bowles' permanent home until his death in 1999.

THE LAST BIG FIGHT
Having lived for the past thirty years in Tangier, Mister Bowles has chosen to remain in his favourite white city waiting for the "last big fight". (cf. Paul Bowles, monologue in Tangier, 1990)