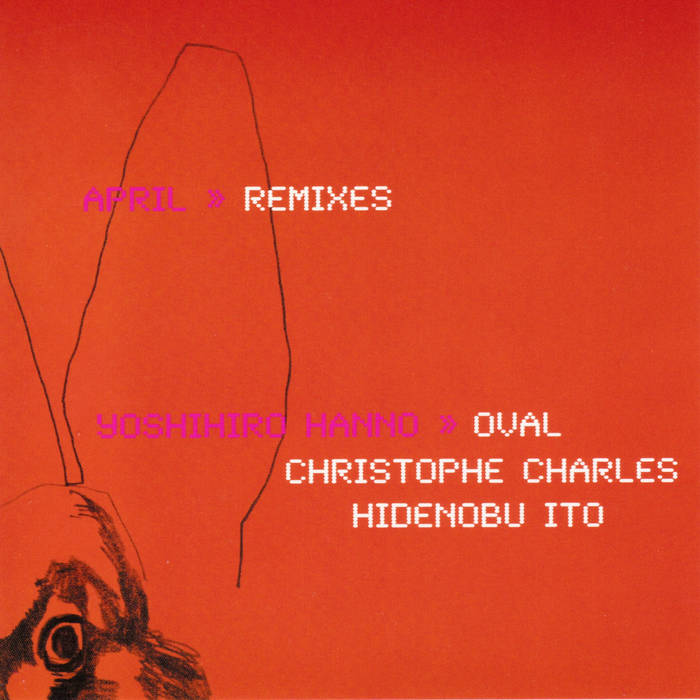 Composed by Yoshihiro Hanno (aka Multiphonic Ensemble) and remixed by Oval, Hibenobu Ito and Christophe Charles.

Between 1997 and 2002, under his own name or with Multiphonic Ensemble, Yoshihiro Hanno released four records on Sub Rosa. April Remixes is the third one, published in 2001. This record combines two limited edition albums by Hanno: April Music (April Music On Canvas #1), and highlights from the subsequent remix album.

Hanno started performing in the late 80s, taking poetry reading and other roles with his Avant-Garde Jazz unit. Its sound had a flavour of Hip Hop elements and method. In 1997, he was noticed as an innovative creator with the album King of May released on Sub Rosa under the name Multiphonic Ensemble. This album received comments such as "giant step of electronics music" and "most important electronic album in last few years." His first album under his own name was Portrait of a Poet. This album that has universalistic beauty received many compliments from artists like Ryuichi Sakamoto and Jim O' Rouke. Hanno composed the music for the movie Flowers of Shanghai directed by Hou Hsiao-hsien, selected for the Cannes Film Festival competition. This was Hanno's first movie soundtrack. He was invited to the Cannes Festival and earned the press' good opinion as a new hope in movie soundtrack composition. In 1999, he released a 2nd album for Sub Rosa, Cirque, as Multiphonic Ensemble. Inspired by the Georges Rouault's masterpiece Circus, the album is built on the concept of whole music and filled with the joy of freedom of creation; it has a lot of energy. In 2000, with Ryuichi Sakamoto, he brought his music and sound to the TV drama Eien no Ko, broadcasted by Yomouri TV. Hanno wrote the theme music for the movie Platform by Chinese director Jia Jia Zhangke.
PRESS

This record released by the label Sub Rosa in June 2001 combines two limited-edition albums by Yoshihiro Hanno: the complete April Music (Canvas 1) and a selection of tracks from the album of remixes that followed (Canvas 2). Hanno's original tracks are interspersed with reinterpretations by Oval, Hidenobu Ito, and Christophe Charles. The repetition factor is almost negligible, as the remixers mostly worked on the entire album instead of one specific track (Hidenobu's "Lab Suite Remix" being the exception). Hanno's compositions tend to be dreamy, airborne, and add vocals (Aki Kudo), piano (Esu), and guitar (Ko Tsuchiya) to the electronics one expects from the artist behind the Multiphonic Ensemble. The remixers' job is almost seamless, their pieces molded in the composer's cast. Oval's glitchy identity is detectable, of course, but not in an intrusive way, and if Charles' construction is somehow more complicated and challenging, it is not at the album's expense. Hanno's own "Trapezoid" brings a delightful noisier touch halfway through the album while still staying true to the general lush mood. April Remixes is not as cutting-edge as some releases on Sub Rosa can be, but it provides a very satisfying and enjoyable listening experience.
François Couture / All Music Guide