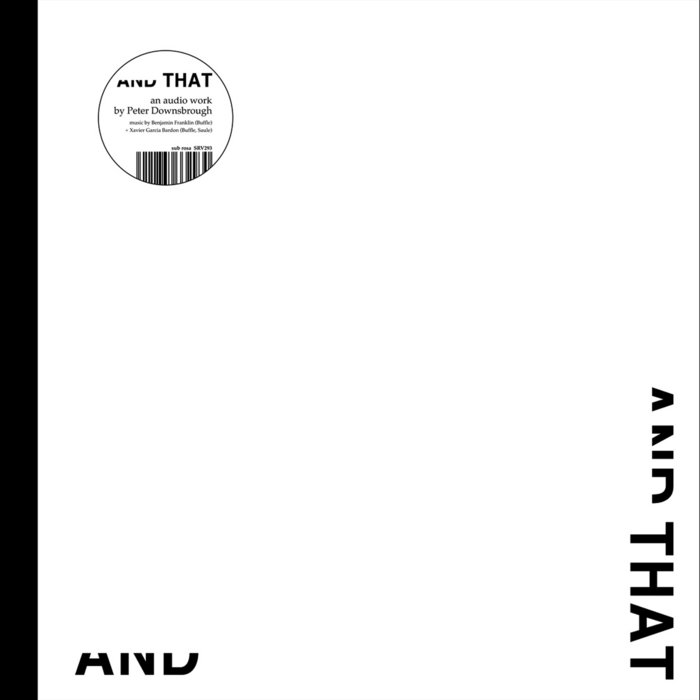 A complete work by visual artist and film-maker, Peter Downsbrough with the collaboration of Xavier Garcia-Bardon and Benjamin Franklin, two musicians of the Buffle collective (Brussels).

The music Downsbrough commissioned for the final edit was composed and recorded in 2007 by Xavier Garcia-Bardon and Benjamin Franklin as a semi-improvisation (a modus operandi they first experimented in the collective Buffle): a mix of ambient electric guitar, sweet electro, street field recordings, treatments and voices. As is often the case with Downsbrough, the final piece seems to be emerging from a world put between parentheses - music that could last forever, where fragments seem to be missing (just like in his typographical work). It's those missing bits we ceaselessly try to find in this music without beginning
or end.

The work of visual artist, photographer and film artist Peter Downsbrough has had a major impact on the perception of art. In the early sixties Downsbrough interrupted his studies in architecture at the University of Cincinnati and Cooper Union in New York in order to work as a sculptor. A decade after his first exhibition in New York (1962) the artist gained international recognition, and has been exhibiting regularly in the United States and Europe since 1972.

The varied work of the artist-ranging from sculpture and books to photography, video, and film-maintains a complex relationship with architecture and typography, while also drawing on the achievements of the early avant-garde (Bauhaus, De Stijl) and Minimal Art. In terms of form, the work of Downsbrough is highly rigorous and exhibits a powerful geometric sense, restricting itself primarily to the use of line, plane, negative space (cutting away), and delimitation. In addition to his spatial manipulations, the artist also has a keen interest in place, as is evidenced in his cartographical works and city photographs.